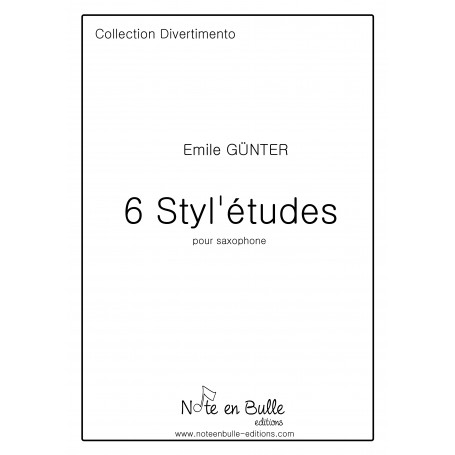 These 6 studies are designed to elaborate a work around various stylistic notions for saxophonists students, which are present in the 20th century saxophone works.These studies can be performed by saxophonist in grade 5 to 7

These studies are a perfect combination of technique and musicality, and are suitable for all saxophones.

In the blues, the use of this mode is a pretext, to break the support points and work around the accents, while swinging.

The Locrian mode is with the Phrygian mode one of the two natural modes, which has a minor second at the beginning of it, what makes it so characteristic. The Locrian mode is a very dissonant mode, it is a Greek mode, present in Jazz, which here is treated as a classical mode. Playing on the first particularity of this mode, that is to say the half-tone between the first and the second degree, this study is articulated on this half-tone to visit different Locrian modes.

With a regular speed of quaver (eight note), and different support points, the phrases go through 4/4, 3/8, 5/8, and other figures. This alternate study approaches particular metrics dear to the countries of Eastern Europe and to Bartok.

The tone scale allowed Debussy, among others, to bring the music of his time into the 20th century. Here, the idea is to go through the two unitonic scales and to make a long musical journey from C to C#.

As the name suggests, the repetition is likely to make more than one of us tangle our fingers... and this by taking up the F major of the first study.